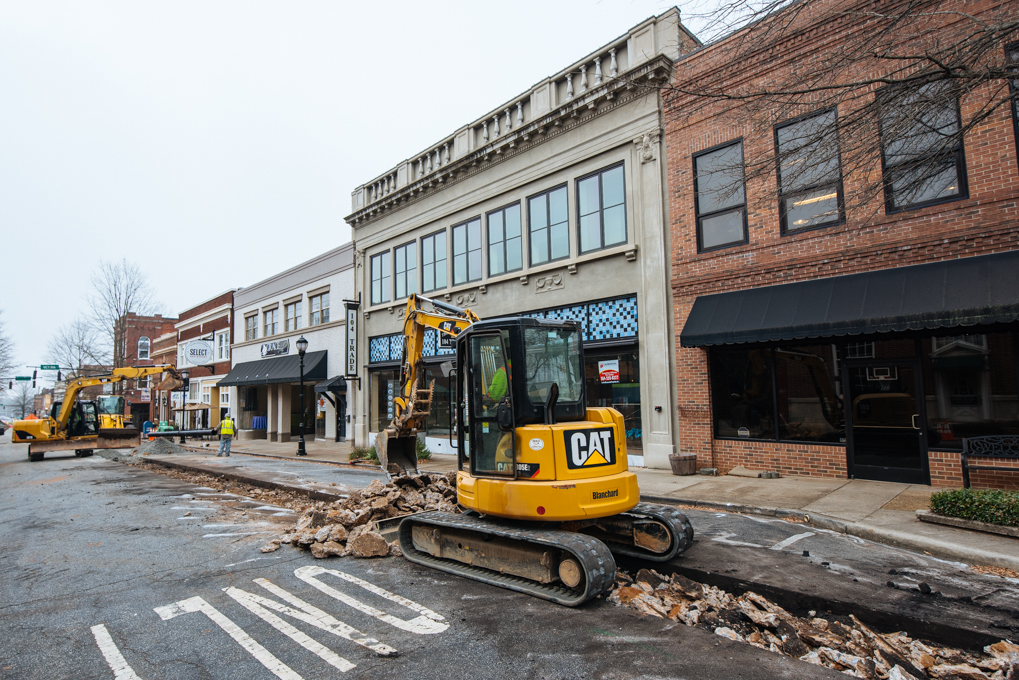 “We’re not apologizing for what we’re doing at all,” says Ed Driggers, Greer city administrator.

The streetscape project, the centerpiece of which is the transformation of Trade Street, broke ground recently and will intermittently disrupt all forms of downtown traffic for about 18 months. Meanwhile, demolition on the site of the highly anticipated Hampton by Hilton hotel by Sycamore Investment Group has also begun.

But that’s not stopping new businesses that depend on accessibility, such as retail and restaurants, from opening.

In fact, three restaurants – SELECT, Ira’s Chicken, and L’Incanto – opened on or steps away from Trade Street shortly before the groundbreaking, the owners knowing full-well the impact torn-up roads and sidewalks could have on their bottom line.

They forged ahead anyway with confidence, and there’s good reason for that.

In response to the potential upheaval, the city of Greer has committed to a proactive and supportive strategy to assist the businesses that make Greer Station a vibrant and thriving downtown.

“I think some of the things that we’ve done is, one, we’re taking so seriously communicating with them, making sure that they’re understanding what this involves, how they will be impacted, what the schedules will look like, how we will continue to communicate with them as that work gets closer to their vicinity,” Driggers says.

Putting its money where its mouth is, the city will continually market that downtown Greer is open and accessible, adjusting the message as needed, Driggers says.

Further, the city has purchased electric shuttles, outside of the $7 million construction budget, that will be used to transport people from surrounding parking lots to retail and restaurants and is positioning staff to help people detour.

In advance of the construction, parking lots, alleyways, and street lighting have all been updated, which will allow customers to access Trade Street and adjacent-area businesses through secondary entrances while the main entrances are inaccessible.

Jeff Gossett, owner of SELECT restaurant, which opened in the former BIN112 space at 112 Trade St., says that after weeks of walking downtown Greer to determine traffic patterns, he landed on the location for his second restaurant. The original SELECT is in Spartanburg.

For him, having the knowledge of working in construction for many years, the streetscape project created an opportunity about which he is confident.

“Bad news is better than no news,” Gossett says. “This whole streetscape project will get a lot of coverage and attract people downtown. We’re right here in the middle of it. Any business I lose will be gained back.”

Warren Peden, owner of Ira’s Chicken at 107 S. Main St., looked at the timing of opening before the construction began as being ahead of the curve.

“This place is going to go somewhere,” he says. “We feel like Greer is a great place to do business.”

Ira’s Chicken opened in the middle of the rainiest stretch of weather the area has experienced in years. In the hospitality business that depends on people wanting to be outside of their homes, bad weather can be a business killer. That was not the case for the hot chicken spot’s first few weeks, when business was steady despite the rain.

“We’ve had three days of sunshine,” he said at the time. “I’m not scared of the 18 months of streetscape.”

L’Incanto, which means “enchanting” in Italian, opened in early December at 117 E. Poinsett St. at the top of Trade Street. Co-owners Carlos and Kristi Echeverri closed their restaurant, Da Vinci’s Ristorante in Greenville, after five years before opening their new Italian restaurant in Greer.

They began looking for a new location to open under a new identity after years of being confused with Davani’s Restaurant on Augusta Street in Greenville, Kristi Echeverri says.

Greer was especially attractive to them because of the streetscaping and future hotel that will draw travelers from BMW and Michelin, she says.

That’s exactly what the city is planning for.

Photos by Will Crooks