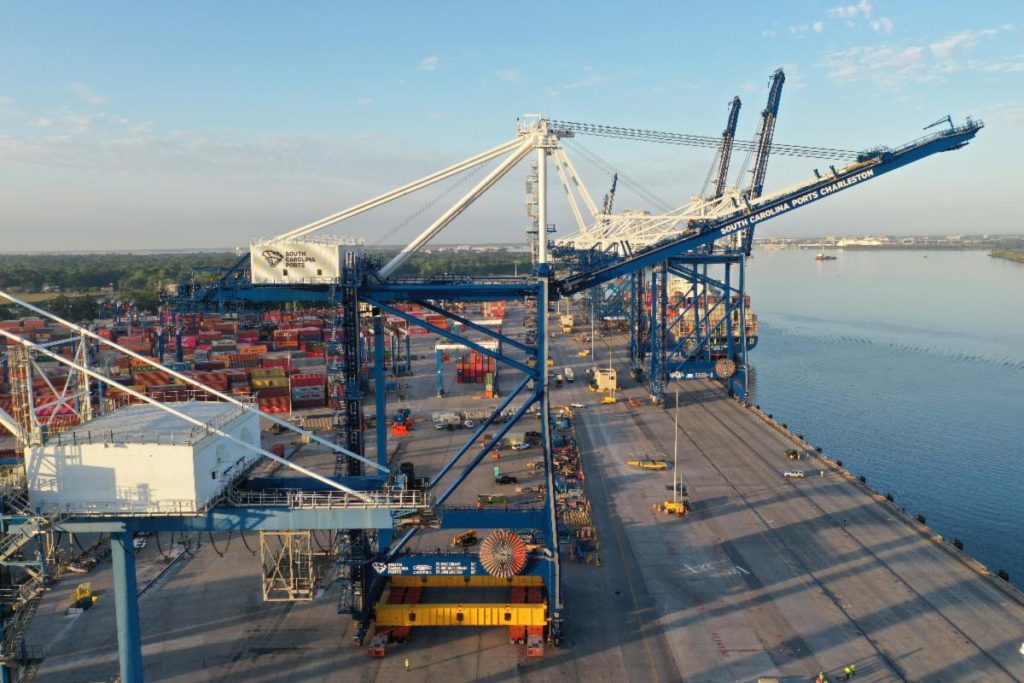 S.C. Ports Authority moved 185,631 twenty-foot equivalent container units (TEUs) across the Port of Charleston’s Wando Welch and North Charleston container terminals in March. SCPA has handled more than 1.82 million TEUs thus far in fiscal year 2020, from July through March, up 2% from the same time a year prior.

S.C. Ports’ two inland ports remain busy as customers look to efficiently move cargo from around the Southeast to and from the Port of Charleston via overnight rail.

“We are incredibly grateful to our port employees and all those working in the maritime and logistics community for their dedication to ensuring cargo — including food, supplies and medical equipment — is efficiently delivered to communities,” Newsome said. “We will navigate together through this challenging time and come out of this stronger than before.”

“It has become increasingly clear since the end of Chinese New Year that the COVID-19 manufacturing shutdown in China and the subsequent, significant shutdown of the consumer economies in the U.S. and the Western world means that we will not achieve our fiscal year 2020 volume plan,” Newsome said.

With a view toward a more conservative outlook for fiscal year 2021, the port is taking a series of immediate cost-cutting actions to address this anticipated shortfall:

SCPA is targeting an overall reduction of 10% in costs (excluding depreciation), which equates to about $20 million (on a cost structure of $220 million).

There will be no layoffs of full-time staff. The finalization of the Hugh K. Leatherman Terminal – Phase One remains on track to open in March 2021, along with the Charleston Harbor Deepening Project, on schedule to achieve 52 feet of depth in 2021.

“We are proud of the dedication of both the SCPA workforce and the greater South Carolina maritime community in keeping port operations fluid in these unusual and challenging times,” Newsome said. “We continue to be very positive about the long-term outlook for both the Southeast port market and the South Carolina Ports Authority in view of a number of business development initiatives, which are ongoing.”

SCPA is currently formulating its budget and business plan for fiscal year 2021, which will be approved by the board at its June meeting. SCPA’s fiscal year 2021 begins July 1 and runs through June 30, 2021.

Over the past five years, S.C. Ports has invested heavily in long-term infrastructure, including increasing capacity and upgrading equipment, to handle the mega container ships being deployed today.

Three new ship-to-shore cranes with 155 feet of lift height have startedworking vessels at Wando Welch Terminal. The cranes arrived in October and underwent months of testing before being commissioned. The cranes are incredibly tall and have a wider reach, enabling crane operators to seamlessly move containers back and forth on 14,000-TEU-and-above vessels.

S.C. Ports is also preparing to open the Hugh K. Leatherman Terminal in March 2021, marking the country’s first new container terminal in more than a decade.

Phase One will have a 1,400-foot berth, 25 hybrid rubber-tired gantry cranes, and five new ship-to-shore cranes with 169 feet of lift height and 228 feet of outreach.

The state-of-the-art Hugh K. Leatherman Terminal will greatly enhance S.C. Ports’ capacity and capabilities. The first phase will add about 700,000 TEUs of capacity; when fully built, the three-berth terminal will double port capacity.

“S.C. Ports is moving ahead with building critical infrastructure to ensure efficient operations and big-ship readiness,” Newsome said. “These investments are vital to remaining globally competitive, which benefits South Carolinians. Port operations support 1 in 10 jobs in South Carolina, and those jobs pay 32% higher than the state’s average wage, generating greateconomic benefits to our communities. We are proud to play a role in this.”