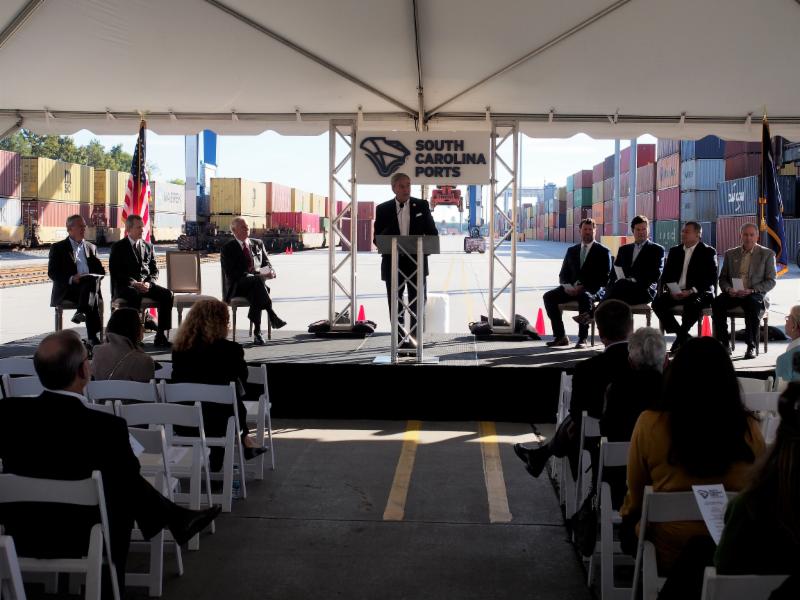 South Carolina Ports Authority (SCPA) had a celebration to mark five years of success at Inland Port Greer, a momentous occasion marked by the facility handling its 446,280 rail lift.

“Inland Port Greer is firing on all cylinders and has been a continued success story since opening in 2013,” said Jim Newsome, SCPA president and CEO. “This facility is a critical component of the intermodal container logistics landscape in South Carolina and the Southeast region. With today marking the 446,280 rail lift, Inland Port Greer is 62 percent over the original projections.”

“In just five years, Inland Port Greer has proven to be a critically important piece of South Carolina’s infrastructure that helps facilitate our growing economy,” said Governor Henry McMaster. “We continue to set records in export sales because companies know that when they invest in South Carolina and decide to do business here, they’re going to get an elite workforce and an unparalleled ports system that can meet every need they may have.”

The Greer facility is linked to the Port of Charleston by the Norfolk Southern main rail line that provides overnight service between Charleston and the Upstate, which extends SCPA’s reach 212 miles inland.

“Norfolk Southern values the strong partnership we have with the South Carolina Ports Authority, including the South Carolina Inland Port, which has evolved into a strategic transportation hub,” said James A. Squires, Norfolk Southern, Chairman, President and CEO. “Today, this key facility provides a unique and sustainable logistics model that supports economic and business growth throughout the region.”

Inland Port Greer operates 24 hours per day, seven days a week to serve the supply chain needs of SCPA’s customers. The facility is positioned along the I-85 corridor – the fastest-growing part of the region – between the key markets of Charlotte and Atlanta, and provides market access to more than 94 million consumers within a one-day truck trip.

“The Inland Port has been a valuable partner for BMW. They have handled over 180,000 containers for us over the past five years and created a much more efficient system for moving containerized product to and from the Port of Charleston,” said Max Metcalf, BMW Manufacturing, Manager, Government and Community Relations. “This success is likely replicated for suppliers and numerous other companies that use this facility.”

Approximately 22 percent of SCPA’s containers move by rail, and intermodal volume has seen staggering growth of 180 percent since 2011. With the tremendous success of Inland Port Greer, SCPA decided to open a second intermodal facility, Inland Port Dillon, in April.
About South Carolina Ports Authority
South Carolina Ports Authority (SCPA), established by the state’s General Assembly in 1942, owns and operates public seaport and intermodal facilities in Charleston, Dillon, Georgetown and Greer. As an economic development engine for the state, Port operations facilitate 187,200 statewide jobs and generate nearly $53 billion annual economic activity. SCPA is soon to be home to the deepest harbor on the U.S. East Coast at 52 feet, and the Port is an industry leader in delivering speed-to-market, seamless processes and flexibility to ensure reliable operations, big ship handling, efficient market reach and environmental responsibility. For more information on SCPA, please visit www.scspa.com.