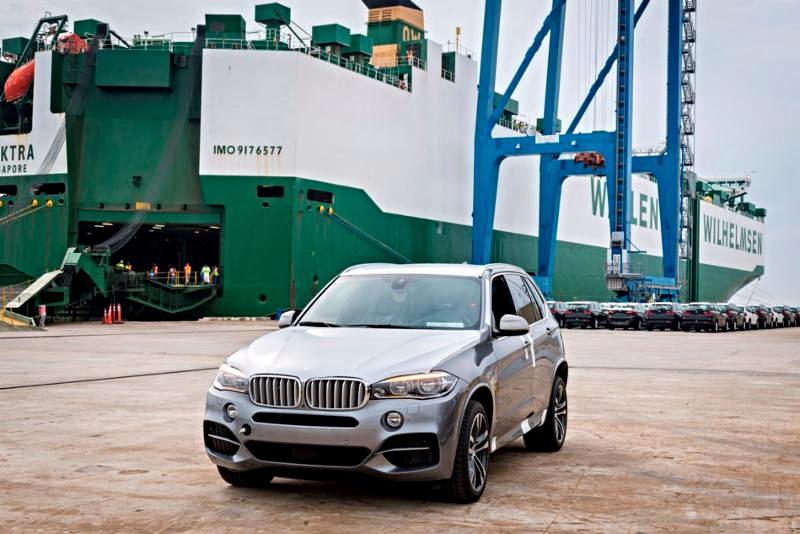 BMW milestone at Port of Charleston from Charleston Business Journal on Vimeo.

Officials from the port, BMW and the shipping community counted up as BMWs were being driven onto the Elektra vessel operated by Wallenius Wilhelmsen Logistics.

The crowd started cheering when the two millionth BMW ­­— a space grey metallic BMW X5 M50d — was loaded for export for delivery to a customer in Germany.

“We cannot tell this story without the port,” BMW Manufacturing President and CEO Manfred Erlacher said, noting that he does not expect it to take 20 years for the next 2 million cars to be exported.

The Port of Charleston played a big role in recruiting BMW to Greer in the early 1990s. The car manufacturer’s first import vehicles came through the port in 1994. At the time, non-containerized cargo was handled at the Union Pier Terminal.

In 2011, the ports authority invested $23 million into renovating the Columbus Street Terminal to relocate those operations and accommodate BMW’s growth. BMW is the largest user of the terminal today. The terminal also will handle Volvo cars when that company begins production in late 2018 at a manufacturing complex in Berkeley County.

The port exported more than 250,000 BMW vehicles in 2015. The port also handles BMW’s containerized shipping needs, including the export of vehicle kits and the import of engines and transmissions.

“S.C. Ports Authority has a strong history with BMW Manufacturing, and their operations are a tremendous asset to our port and region,” Ports Authority President and CEO Jim Newsome said.

BMW was the launch customer for the S.C. Inland Port in Greer in 2013. The inland terminal has since added more than 10 customers and handled more than 75,000 rail moves last year.

Newsome said the port “is proud to serve BMW’s ‘just in sequence’ supply chain needs through our Charleston and Greer facilities, and we look forward to supporting their continued future growth.”