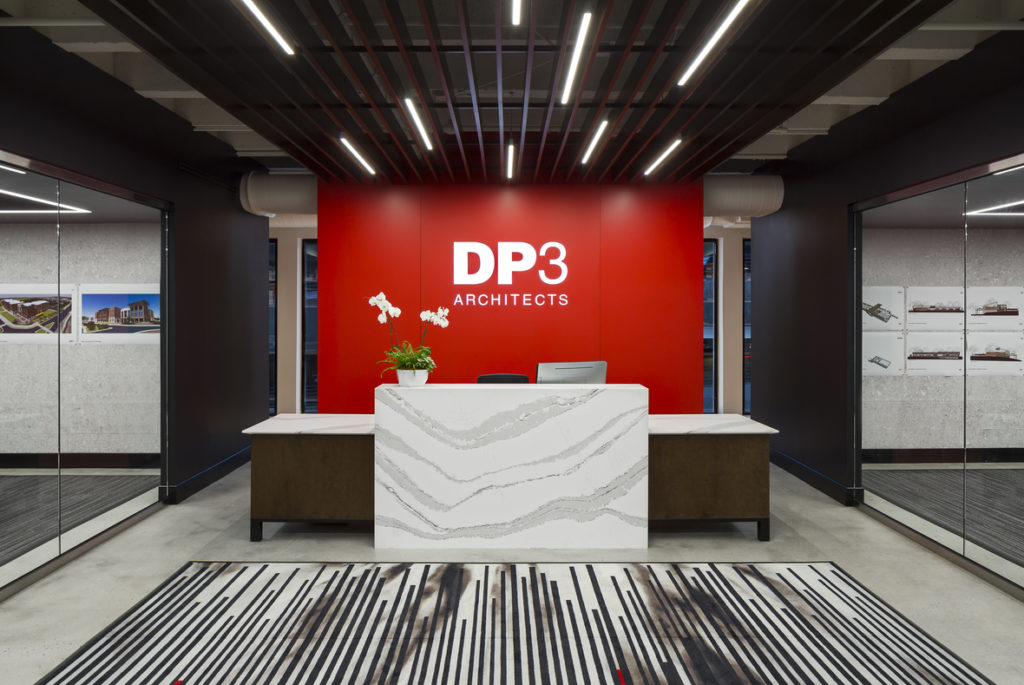 Greer-based Satterfield Woodworking joined forces with other local fabrication and design companies to create a showplace for DP3 Architects’ new downtown offices at the Wells Fargo Center in Greenville.

Rozelle Stone, Satterfield Woodworking and Mitchell Contract Interiors worked together with DP3 Architects to create two major stone projects in a modern new home for the firm, which had worked out of the 1890s-era Greenville Gas and Electric Light Company building for the last 17 years.

Meg Terry, principal and vice president of business development for DP3, said technology available through Rozelle Stone made it easier to create a space featuring the manufactured quartz.

“It’s a pretty important piece of technology,” said Terry, who also serves as interiors studio leader for the firm. “Cambria quartz slabs like we used, even though they’re manufactured, have patterns that are extremely veined. The technology helped us match the slabs so they’re aligned in a way that makes the most sense.”

Working with large stone installations that include multiple slabs of stone aligned together has traditionally been a challenge because it’s difficult to match the unwieldy slabs in a manner that creates visual harmony. Designers strive to arrange the patterns in a way that is visually appealing, she said.

Rozelle Stone uses high-resolution imaging so stone slabs of any kind can be matched in a way that works best for designers and their clients. Designers can match patterns by digitally moving around the images in a way that isn’t practical with the actual stone. Terry said sometimes designers want patterns to match close enough that they appear seamless and sometimes they want them to match in a way that is complementary.

She said the final product at her own firm, including a lobby statement piece and a four-panel backsplash for the conference room, “supports our continued growth and provides an inspiring work environment for current and future team members.”

Rozelle Stone owner John Stone said the technology also helps him make sure the stonework is not a budget surprise.

“Our product is always going to be a rather expensive item that occurs toward the end of the project so it’s absolutely necessary that the costing be determined and nailed down at the initial stages, at design development,” he said. “We like to be involved in the initial stages so that we can provide a good costing price range that we know they can deal with when it comes time. In other words, they’re not going to be surprised with the cost. We hedge against that by providing good accurate information going into the project.”

Rozelle Stone also uses Auto Cad and a special Hubbell Lighting system that enables clients to see how their stone will look under different lighting situations.
“Every one of these projects begins with a client and an architect and the architect determines the best way to meet the client’s needs,” Rozelle said.