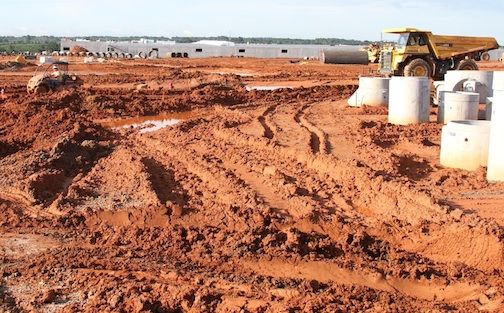 Relentless rains in upstate South Carolina have slowed construction and delayed the opening of a new inland port in Greer, an official said Tuesday.

South Carolina Ports Authority President and CEO Jim Newsome told the authority board about the delay in a meeting in which members also learned container volume through the state’s ports increased 9 percent during the fiscal year that ended last month.

“We’ve had 58 rain days and a kid could have a lot of fun in that place,” Newsome said, referring to the mud and standing water in places on the site of the inland port.

The $25 million port, a key part of a 10-year, $1.3 billion plan to improve the authority’s facilities, had been scheduled to open around Labor Day. Newsome said the first cargo should now move through around Oct. 1. On-site testing is expected in September.

The agency broke ground on the port earlier this year. It will provide a direct rail link to Charleston port facilities. It’s also expected to reduce the number of tractor-trailer trucks traveling busy Interstate 26 between the upstate and the coast.

The board also learned that 1,894 ships called at the state’s ports during the last fiscal year, an increase of about 5 percent over the previous year. About 182,000 cruise passengers either sailed from Charleston or were on ships making ports of call. That’s down about 4 percent from the previous fiscal year.

Newsome said while container volume is expected to grow, there may not be a corresponding increase in the number of ships in the future as steamship lines create alliances where they pool their resources.

That, he said, means supersize container ships may be appearing at ports earlier than if each line had to buy them for themselves and run separate routes.

“They have reason to deploy bigger ships earlier than they would have otherwise,” he said. “We think that ultimately is an advantage for deep water harbors because big ships will be deployed earlier.”

Charleston is pursuing studies of deepening its 45-foot shipping channel. Maritime interests want the channel deepened to 50 feet in a project expected to cost upward to $350 million.

The board also agreed to spend almost $2 million to raise the dikes on its Drum Island dredge disposal site on Charleston Harbor by 6 feet. The site is at capacity and raising the dikes will create space for another 1.5 million cubic yards of silt dredged from turning basins at authority piers.

The contract went to L & L Contractors of Andrews, S.C.