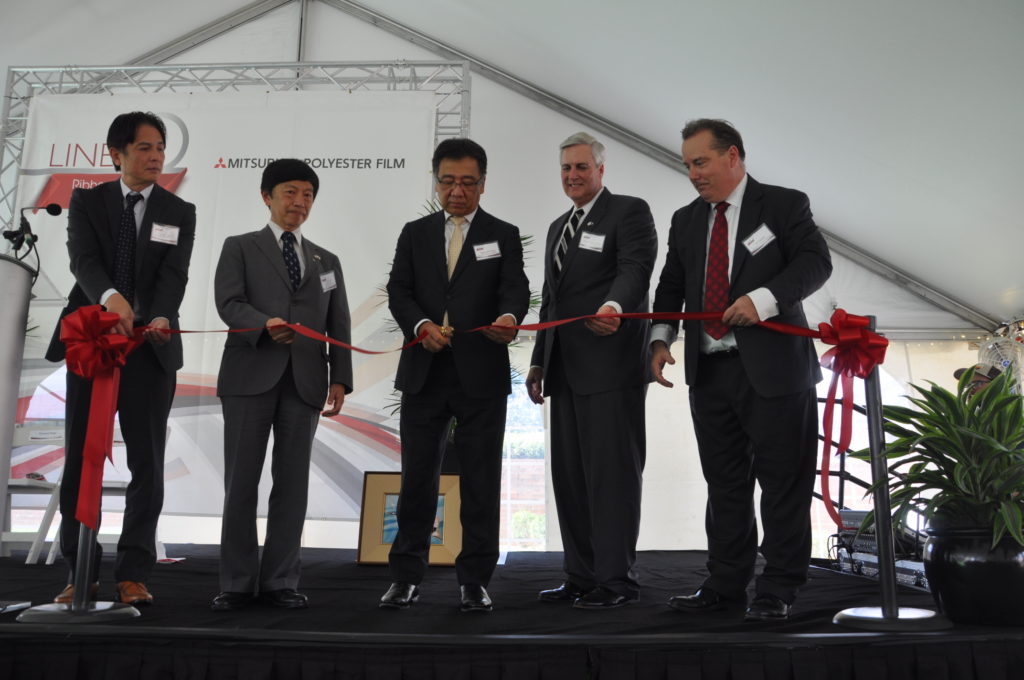 The event was held to celebrate its most recent expansion which included the installation of the world’s largest polyester film line. It also   marks the company’s 20-year anniversary with Mitsubishi Chemical Corporation. The Greer facility has been in operation for over 50 years. Its Hostaphan® products are used in a variety of applications, including packaging, industrial and specialties, electrical, imaging, and magnetics.

The ceremony, held at the company’s existing 193-acre site on Hood Road, was attended by more than 150 guests and included a message by the Honorable Rick Danner, Mayor of the City of Greer. Customers, vendors, regional, state, and local officials, as well as executives of Mitsubishi Chemical Corp. in Japan, were in attendance.

Mitsubishi Polyester Film President and COO Bill Radlein addressed the audience. “On the eve of the 20th anniversary of the formation of Mitsubishi Polyester Film we are celebrating the completion and start-up of Mitsubishi Chemicals most recent and significant investment of $100 million in our Greer, SC facility. As the Line 9 investment did in 2003, Film line 10 will transform our business and our manufacturing facility, providing the additional capacity and enhanced technology needed to support our key customers.”

He further remarked that “the domestic and global markets for polyester film are growing at rates of 4-6% per year. Over the last few years we are also seeing a surge in new applications and product development in both existing and new markets. Line 10 provides us the opportunity to support our customer’s growth and innovation needs. We are committed to increasing our support and growth with key customers in both our core and new markets.”

In addition to investments in polyester film, Mitsubishi has shown its support for this location by investing in other core business such as Mitsubishi Chemical Performance Polymers (MCPP). “We should always keep in mind that these investments are only made possible through continued support we get from the State of South Carolina, Greenville County and the City of Greer, SC. The Upstate of South Carolina continues to be a leader in attracting and supporting manufacturing companies in their investments,” Radlein said.

In addition to the production facility in South Carolina, Mitsubishi Polyester Film has manufacturing locations in Japan, China, Indonesia and Germany and is part of the Mitsubishi Chemical Holding Corporation, one of the largest chemical companies worldwide with annual revenues of approximately $40 billion.