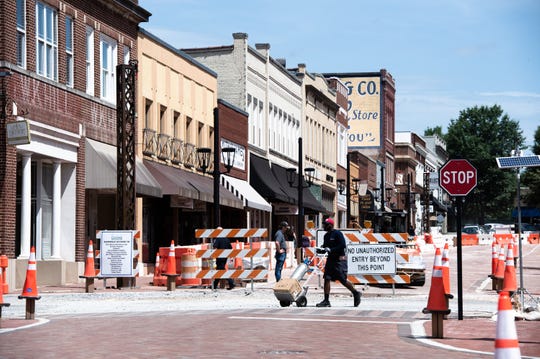 The construction that will transform downtown Greer will give Shelley Jordan an opportunity to be transformative to more customers.

Jordan is the owner of The Shoppes on Trade, one of more than a dozen businesses alongside Trade Street, where the city’s $10.8 million streetscape and infrastructure project — CenterG —  is in full swing. 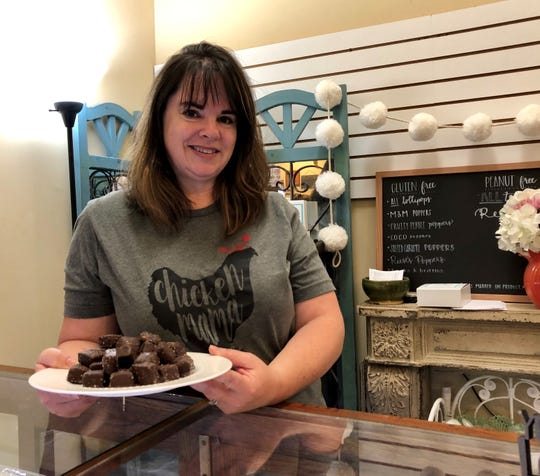 The multi-colored brick pavers that will give Trade Street a European-style drive have been laid in the 300 block. The 200 block of Trade is being prepped for that work now.

These days, dust swirls near the door at 211 Trade St., where Jordan welcomes customers with a hug, a piece of chocolate, or both.

When dust settles, and the project is fully complete in July 2020, Jordan believes more people will come downtown and more will visit her shop.

That will give her an opportunity to “love on more people.”

“I see it as a huge blessing,” she said.

As does James Carter, owner of Empire Limited Haberdashery & Tuxedos at 205 Trade St. He is very “excited” about the possibilities that the redevelopment brings to downtown Greer. 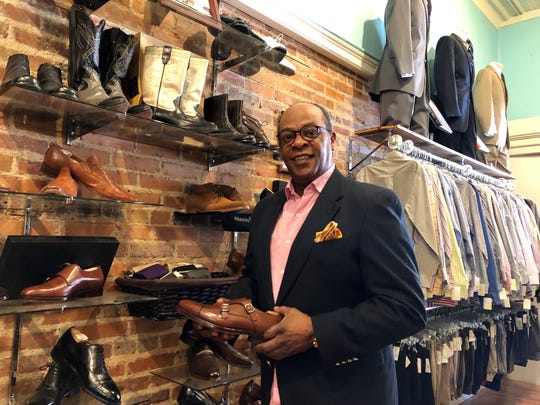 “For years and years, downtown Greer has been kind of rendered almost absentee,” he said. “There hasn’t been a whole lot of activity down here.

More activity will cause more people to come, he said.

“I anticipate hundreds and hundreds of people at a time coming down here doing day trips just to visit some of the shops and restaurants in this area once we get full blown,” Carter said.

Greer broke ground on its streetscape project in January. The project was launched in 2017 when Greer CPW began making upgrades to aging water, sewer, and gas lines in the central downtown areas.

The project follows revitalization that’s been underway in the city since the arrival of BMW Manufacturing in 1994 and the completion of its new municipal buildings in 2008.

Carter moved his business to downtown Greer in 2014 and purchased the building a short time afterward. Since then, there has been an emergence of businesses and restaurants, he said.

But when the city revealed its plan for a new streetscape for downtown, that gave him a new sense of excitement.

The project affects all of downtown Greer.

The most decorative part will be Trade Street, where the multicolored brick pavers will be laid and curbs will be removed to create an open space that enables the street to be transformed into a pedestrian plaza for special events, the city said.

Sossamon Construction of Gaffney expects to complete the project by June 30, 2020.

Driggers said the city spent two years advising downtown merchants of what was coming and when that they could begin to understand and prepare for the impact.

“It’s an 18-month construction project so we knew early on that there would be impacts to our businesses,” Driggers said. “But we made a commitment in the very beginning — and we’re still honoring that commitment — that our objective is to get in and out of in front of any business as quickly as we can.”

Eligible merchants could apply for a $10,000 grant — $5,000 from the City of Greer and $5,000 from GCRA — to improve their front or rear façade with no individual financial investment, the city’s announcement said.

Carter said he took advantage of a façade grant for his store. The city matched that grant with $5,000 and offered another 50 percent for the next $10,000, he said.

For a total cost of $11,000 and only $500 of which was out-of-pocket, Carter created an outdoor living space and added rental and sales to his brand. A barber shop and spa will be implemented there as well, he said.

“We put on a 20 x 14 overhang that covers the back and then we built a little garden area we call ‘Sticks & Stones’ for our cigar garden,” Carter said. And, he said, “we moved from just being a men’s consignment to a men’s haberdashery tuxedo sales and rental.”

Greer Mayor Rick Danner, whose office in CountyBank is in the 300 block of Trade Street, said when many people think about impact, the thought typically goes to economics or what is the multiplier effect?

When the city started its downtown project, the occupancy rate there was at 95 percent.

“It wasn’t that we had vacant buildings and that we wanted to do this project so we would attract people to empty buildings,” Driggers said.

“We had a very robust downtown operating — spaces being leased, owned — and what we are seeing is that as we’ve continued to make these investments in downtown, property owners are reinvesting in their properties simply because they see more opportunity that the streetscape will bring in bringing people to downtown,” Driggers said.

The project is also bringing new businesses there.

Right now, the work there is mostly soil review, seismic testing, those types of things now because it’s a multi-tiered structure.

“We’re making sure that we understand what the stress factors need to be on the concrete, how deep the footers need to be, all of those things to make it safe,” Driggers said.

That Hilton branded hotel would not have been attracted to downtown Greer if it weren’t for the city’s commitment to its streetscape project, Drigger said.

“There was a recognition on their part that we were making a substantial investment in our downtown,” he said. “They wanted to be a part of that.”

Several new restaurants have opened or are in the midst of opening in spite of construction.

Thai Vegan recently opened at 219 Trade St. Crate Restaurant and Wine Bar is expected to open in August a few doors down in August.

About 10 minutes away is a proposal to add up to 250 single-family townhouses and a neighborhood commercial area on the site of the former Victor Mill.

David Merhib, president and CEO of the Greer Chamber, the redevelopment is not just about the streets. It’s about the image the downtown will have because of the improvements.

The city has a few rentals and Airbnbs downtown, but not a hotel and not a lot of places where people can live and work, Merhib said.

“I think this is will change the image,” he said. “People will drive in and want to stop.”

“I think that transformation is a positive note, but also it will be tangible so you’ll be able to see the transformation, but it will also be the feel of a positive downtown,” Merhib said.

A 3D tour of the project can also be viewed here.