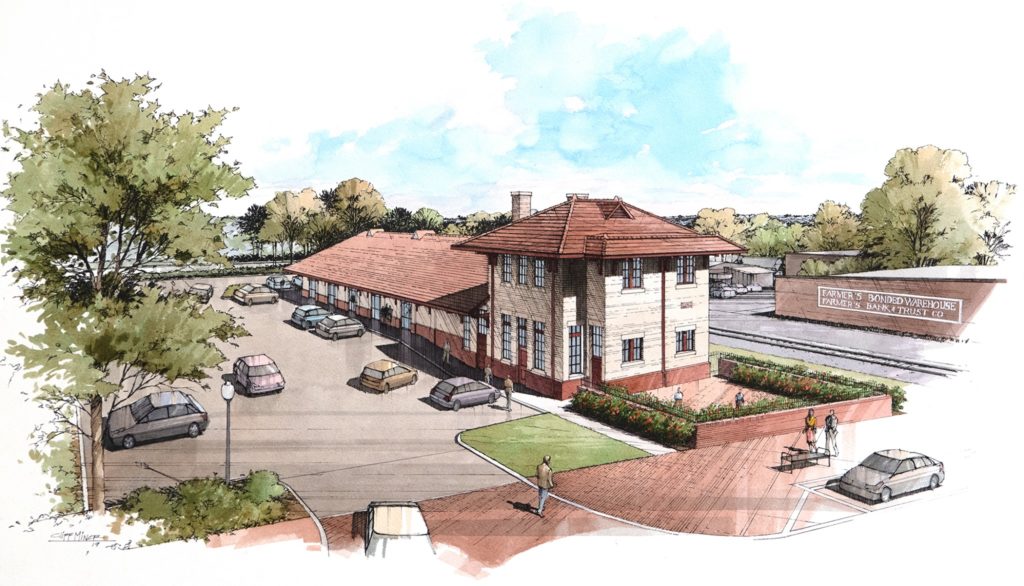 An old Greer depot is being prepped for a “bold new future.”

That’s a way Steven C. Hawkins introduced the announcement about plans for a $1 million redevelopment and restoration of the Historic Greer Depot.

Located at the corner of Trade and Randall streets in downtown Greer, the depot will be transformed, in part, into a 3,500 square-foot event venue and meeting space and renamed in honor of his father, Rudolph M. Hawkins.

The upstairs suites will be the home base for the Western Carolina Railway Service Corp. and its subsidiaries, Hawkins, president of that corporation, said in his prepared remarks.

La Bouteille, a wine and beer boutique already housed in the depot, has made a “long-term commitment to keeping its establishment in the depot,” a press release said.

Changes on the exterior will include the roof being stripped down to the original lumber and replaced. New gutters and additional period correct lighting will also be installed.

Hawkins said the changes announced in Greer Thursday will ensure that the depot, a  107-year-old architectural landmark and city-center focal point, “remains a treasured gem for generations to come.”

When you approach and enter the completed, restored structure “you will clearly feel like you’ve stepped back in time,” the release said.

The depot was placed on the National Register of Historic Places in 1987.

According to the register,  the depot was designed by Charles Christian Hook of Charlotte, North Carolina, and was constructed 1913 to serve as a combination passenger station and freight warehouse for the Piedmont and Northern Railway.

“The building is architecturally unique in Greer both in style and as the last surviving railroad depot of the five original two-story depots built for the Piedmont and Northern Railway,” the register’s website said.

Piedmont & Northern served Greer as an independent company until 1969, when it was merged into Seaboard Coast Line, which through subsequent mergers, became the CSX Transportation of today in 1986, according to Hawkins.

From the time the depot was built through 1983, the depot served the railroad, with the upstairs serving as City Hall and Council Chambers from 1913 to about 1937, and as storage for city records until the 1950s, according to Hawkins.

The depot then fell into vacancy and disrepair. Seaboard wanted to raze

the structure, according to Hawkins.

Instead, the Greenville County Redevelopment Authority purchased the building from Seaboard on behalf of the city of Greer, Hawkins said.

Station One Partnership purchased the building from GCRA in 1986 and redeveloped it into a subdivided retail/commercial space, Hawkins said.

Hawkins and his wife, Cheryl, are the owners of Letchworth Properties LLC.

Their company purchased the depot in 2017.

During his announcement, Hawkins dedicated features of the project that will serve to honor the memory of his parents.

The depot itself will be redeveloped as the Rudolph M. Hawkins Historic Greer Depot Meeting Venue and Event Space.

The new rose garden and patio space at the west end of the building was dedicated as the Marlene Faye Holdsworth Hawkins Historic Greer Depot Memorial Rose Garden.

“Having taken countless roses from my mother’s rose bushes in my seemingly, never ending teenage pursuit of love, it seems only fitting to honor her memory for posterity with a gift of her favorite flower, the rose,” he said.