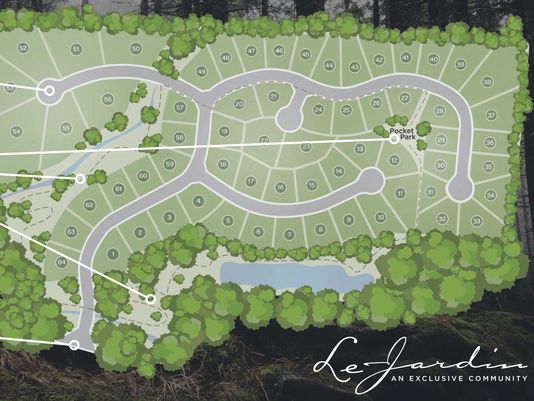 A gated community of high-end homes is planned for Greer, complete with walking trails, a pocket park and landscaping that obscures the homes from the roadway.

Le Jardin will be off Howell Road in Greer, just off State 14 and near Interstate 85. Once visitors and guests pass the gated entrance, they will go down a 250-foot wooded drive designed to create a “secluded” feel, keeping the outside road and the homes inside the gates out of view from each other.

The homes will be built in the English Tudor and French Eclectic styles to “singularly controlled, professional architectural standards,” according to Stoneledge founder and the developer of the project, Chris Bailey.

While high-end development has increasingly popped up downtown, Bailey said he chose the wooded Greer property, crisscrossed with streams, because future homeowners could get more “breathing room” for their money. He wants to buck the recent development trend of high-density communities with small lots, some a tenth of an acre.

Bailey also chose the property because it’s in an affluent area and is zoned for schools including Riverside High School, which he called a “very desirable” part of the school district.

Bailey said he did not see a severe downturn in business during the housing crisis of 2008, which affected home builders across the country. A halt in development of lower-priced homes in the “sweet spot” of $200,000 to $400,000 is what many real estate professionals credit for the Upstate’s current inventory shortage in that price range.

“They’re back to selling pretty quickly. Things that would sit for a year are now going much faster,” Simmons said. “We’ve seen a trend; things that were sitting are now selling.”

“There’s a lot of people who cash out in more expensive communities or come here with corporate moves because they know a $500,000, $750,000, $1 million home in Greenville, South Carolina, could be a $2 million or $3 million home in a place like Northern Virginia or Connecticut,” Barbour said.