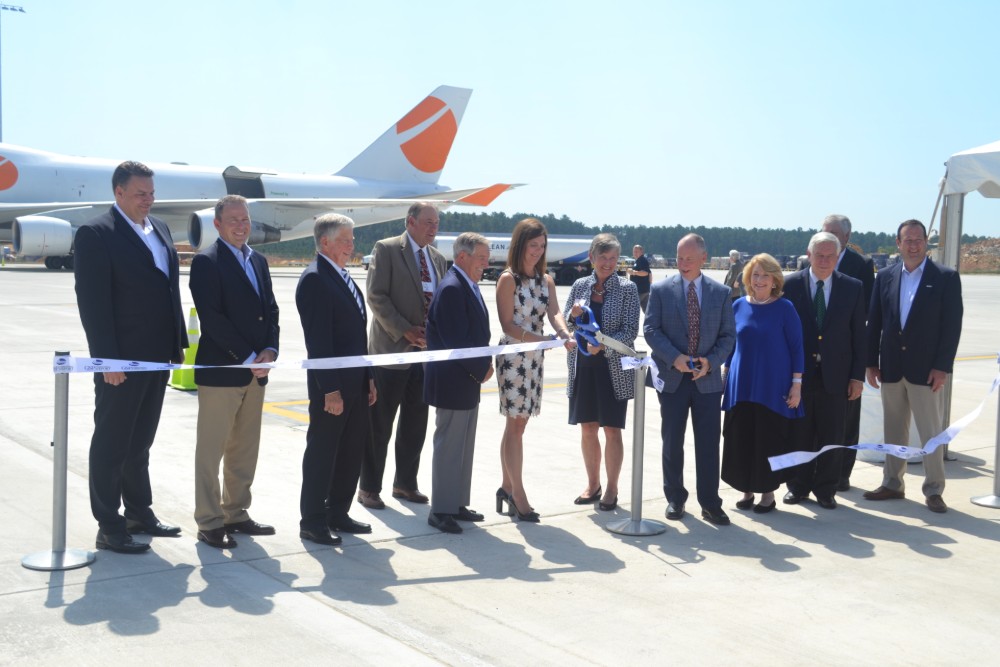 The Greenville-Spartanburg International Airport celebrated the opening of a $33 million air cargo facility on Monday, making room for a significant increase in cargo traffic and tripling the number of jumbo cargo planes that can load and unload at once.

GSP President and CEO Dave Edwards pointed to a pile of dirt and the end of the 17-acre apron and told those gathered for a ribbon-cutting ceremony that work has already begun to secure funding to double the new facilities.

In recent years air cargo volume and demand for freight services in the southeastern United States has increased dramatically, according to a news release, and the new facility, which includes 110,000 square feet of cargo warehouse space, positions the Upstate and GSP to capitalize on this growth.

“The opening of our new air cargo facility will begin a special new chapter for GSP,” Edwards said. “GSP’s ability to be a hub for cargo has attracted many companies to the Upstate since the 1960s. This new facility allows GSP to take the region’s logistics infrastructure to new heights.”

The cargo facility and apron allow the airport to accommodate up to three Boeing 747-800 freighter aircraft simultaneously. Senator International, a German-based freight forwarder, is using half of the facility to support its Senator Atlantic Bridge flights from GSP to Frankfurt-Hahn with twice-weekly connecting service to Johannesburg, South Africa.

Tim Kirschbaum, chairman and CEO of Senator International, said he wants to see daily flights in his company’s future.

Senator’s new location is made to serve their international client base by offering overhead crane capabilities with lift capability up to 20 tons and a Cyro Farm which can be used to cool specialized healthcare equipment. The new design and setup will enable Senator to optimize its processes and meet the timelines of their clients by guaranteeing faster lead times, according to the news release.

In 2018, the airport handled 119 million pounds of cargo, including more than 550 horses competing in the World Equestrian Games in Mill Spring, N.C., the release said. The airport is a hub for automotive parts, vehicles and medical equipment.

In 2018, Cerulean supported more than 1,400 cargo flights, an increase of 55 percent compared to the previous year. In addition, the airport last year also moved up to No. 59 from No. 84 two years ago on the Federal Aviation Administration’s (FAA) list that ranks air cargo volume for airports in the United States.

GSP reported late last year that its 2018 economic impact study found that the airport has a $2.9 billion impact on the Upstate economy. Cargo operations at GSP contribute $478 million to the region’s economy.