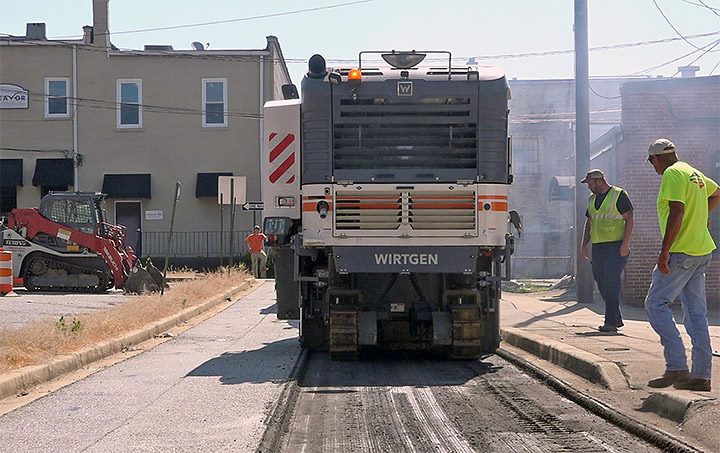 With steak and oyster houses, salons and boutiques, ice cream and antiques, Greer’s downtown is humming with activity. But it has the potential to be even more, city leadership believes — and the transformation they envision is now entering the next major phase.

Crews have begun repaving parking lots and alleys downtown, the first of several changes planned for the heart of the city.

At the center of it all is Trade Street, the main artery in the downtown area the city has dubbed Greer Station. It will get a makeover through a public streetscaping project that will transform it from a standard small-town main street into a European-style drive similar to those in old-town Montreal.

Also planned is a redevelopment project that will bring a Hampton Inn hotel, private retail and a new public parking facility to a site currently occupied by mostly abandoned buildings.

The projects follow a revitalization that’s been underway in the city over the last 20 years, beginning with the arrival of nearby BMW Manufacturing and followed by the construction of Greer City Park and new municipal buildings. The streetscaping and hotel projects have grown out of that momentum, and the potential they represent for downtown Greer is in turn contributing to a bright forecast for the area.

“You have to create a place that people want to go,” City Manager Ed Driggers said.

That’s the calculation the city is making with its investment in the new look for downtown Greer. Leaders foresee younger families moving back into cities, particularly those that are lively, walkable and accessible, where they can spend their time and money.

“So that’s what we’re creating in an area (where) 20 years ago, at 5 p.m., there was no one on the sidewalk,” Driggers said. “We have to be there with that to capture the opportunity.”

The streetscaping project is the straw that stirs the drink in Greer’s downtown vision.

“(It’s) the focal point of all the work that we’re doing in the downtown area,” Driggers said.

Trade Street will be resurfaced so it’s completely flat from building to building and landscaped with bollards and planters to delineate the sidewalks from the roadway. It’s designed with pedestrians and outdoor dining in mind, but it will still be open to traffic.

“The atmosphere of Trade Street will be this open-air plaza,” Driggers said. “It will look very different from what we see in most communities around us.”

The final design is still up in the air — it will be determined when a contractor is selected for the project, which is scheduled to be put out to bid by mid-summer at the latest, said Steve Owens, communications manager for the city. Work is then expected to begin once the weather warms up in 2019.

For the hotel project, demolition on the site will start by late July, with construction planned for the first quarter of 2019, said Neetu Patel, the vice president of operations for Sycamore Investment Group. The projected opening date is the second quarter of 2020, he said.

The city’s investment in the downtown projects is about $15 million, about $8 million of which will go toward the hotel and parking facility, Driggers said.

The funding is coming from bonds ($12 million), grants ($1.1 million) and the city’s fund balance ($3 million). There will be no additional tax millage to pay for the projects, Driggers said.

“We’ve been setting aside for a number of years, making sure that we had sufficient resources,” he said.

The city’s investment has already paid off, Driggers said. The hotel represents $20 million in private money, eclipsing the $15 million the city is spending on all the work downtown.

That private investment wouldn’t have happened without the streetscaping plan, Driggers said. The message he got from Sycamore Investment Group was that they chose to build in Greer because of the vision the city has for its downtown.

“One of the leading factors for them was not necessarily what we had happening today,” he said. “But what really gave them interest in doing this versus somewhere else was what was on the board to occur.”

And those future projects could increase if the city’s calculations pay off. The city is in discussions to bring at least one multifamily housing development to the downtown area, Driggers said.

“We believe that one or more of those will occur, so that will be continued investment that’s happening there,” he said.

And he expects more good things to follow, whether it’s reinvestment from existing businesses downtown or new businesses that see opportunity in Greer.

That’s what Jeff Gossett, who owns SELECT Restaurant, saw when he decided to buy the space on Trade Street formerly occupied by BIN112 to open a second branch of his Spartanburg-based eatery.

Gossett said he saw more potential in Greer for his investment to grow in value than he did in Greenville.

Though Gossett paid top dollar for the BIN112 building — $1.1 million, for a property with a taxable market value of $405,960, according to Greenville County property records — that’s not unusual as the market starts to tighten, according to those familiar with Greer property sales.

“Clearly, supply and demand is having an effect,” Deaton said.

He expects asking prices for commercial property to continue to rise downtown, along with property values and leasing rates, given the projects the city has on the way.

Commercial leasing rates have “increased dramatically” over the last five to 10 years, said Chuck Langston, a Greer real estate agent with Langston Black Real Estate Inc. They range from $10 to $14 per square foot, he said.

By comparison, the average commercial leasing rate in downtown Greenville is $24.70 per square foot, according to a 2018 analysis by global real estate and investment firm CBRE, making Greer an attractive option for new businesses.

Stomping Grounds coffee shop co-owner Grey Garland said he “sees nothing but positives” from the investment in downtown.

Garland said the customer base at his Trade Street cafe “is getting larger every day” and has also become more international. The Hampton Inn downtown will only bring in more people, he said.

“We’re on the cusp of blowing off the map, I’m afraid,” Garland said.

He and fellow Trade Street business owners Cameron Farr, of Blue Ridge Brewing, and Will Yarborough, of Carolina Treasures, said they are excited about the direction downtown Greer is headed with the streetscaping project.

“It’s something that needed to be done,” Yarborough said. “I’m happy they’re taking this initiative.”

The transformation the city is planning won’t happen overnight, though, and Mayor Rick Danner said he realizes both downtown business owners and shoppers will face some short-term challenges.

“Our hope is that a little pain will be worth the gain,” he said.

The repaving of alleys and parking lots downtown will be followed by street repaving and the widening of intersections around the perimeter of Greer Station. That work is planned to start in the fall. The Trade Street streetscaping will then begin in 2019.

All the construction could cause some parking issues, said Mike Bullock, who’s operated Bullocks Barber Shop on Trade Street since 1969.

Other shop owners on Trade Street said they’re eager for the streetscaping work to begin.

“Do it already,” Blue Ridge Brewing’s Farr said. “I’m just ready for it to get started.”

Garland said he was ready to see some action, too.

And all the construction doesn’t have to be a deterrent for visiting downtown, business leaders said.

Marjorie Dowd, president and CEO of the Greater Greer Chamber of Commerce, said they want people to come look at the work in progress so they can feel excited about what’s to come.

Businesses are planning to embrace the streetscaping work with promotions and activities planned around it, she said. Look for “hard hat happy hours” and coasters with information on how to stay up to date online with what’s happening downtown.

The city has also set aside $100,000 in grant money that downtown businesses can apply for to make improvements to alternate entrances to their stores, if their access is affected by the streetscaping project.

One grant has already been awarded to Empire Ltd., a men’s clothing store at 205 Trade St., for façade improvements, Owens said.

‘Greer Station, that’s where I live’

With its down-to-earth aesthetic of short, brick buildings and classic train depot, Greer stands out from other cities and towns in the area, Danner said, and the latest projects will only add to that uniqueness. It’s more than a bedroom community, he said, and different from Greenville and Spartanburg, but it also offers the amenities that can be found in the two larger cities.

“We are Greer — we are a distinct market from the two,” Danner said. “We are a small town with a big-time kind of feel.”

He thinks that’s what makes Greer such an appealing market for new businesses and residents.

“It does sell to a broader audience — there are folks that are looking for the smaller communities,” he said.

And that draw is spreading to make Greer a destination for Upstate residents.

Taylors resident Robert Few said he’s been coming to visit Greer City Park with his kids over the past 10 years, and his family loves the festivals the city hosts there.

“There’s something going on here all the time,” said Mary Atkinson of Greenville, who also frequents the park with her grandsons.

Greer is attractive because it has fun things for families to do, said Atkinson, who feels downtown Greenville is more adult-oriented. She said Greer’s investment in its downtown has been worth it.

And Bernie Shink, a Maine resident, liked Greer so much he decided to buy a house in the city. He, too, is looking forward to what the streetscaping project will bring.

When the work downtown is complete, Driggers hopes it will be a real point of pride for Greer residents. He wants people to say, “Downtown Greer, Greer Station, that’s where I live.”