Nearly 15 years ago, Scott Stevens was looking to buy a live/work downtown property to house his web design business. He looked in Greenville — too expensive for his budget even then — Simpsonville, Mauldin, and other surrounding walkable communities. And then he found Greer.

“They have a plan for where they’re going,” he says. “Greer really had a vision.”

Stevens landed at 230 Trade St. in 2003, which was a shell of a building and much bigger than he’d originally planned. Through a series of events, he completely revamped his plans and turned the street-level space into The Davenport, an events space that through cooperation with local merchants and support from the city has been successful from the opening. He has since renovated the upstairs and lives there with his wife and two young sons and also manages Grace Hall events space down the street.

The vision that drew Stevens and many other retailers to downtown Greer, or Greer Station as it’s referred to based on the former train station, came from The Partnership for Tomorrow, a community initiative for the future of Greer, which commissioned the Greer Community Master Plan. The plan focuses on growing the local economy and emphasizing entrepreneurship; promoting the walkable, outdoor areas of the city; and enhancing aspects of the city that are uniquely Greer while using its history to shape forward momentum.

“A strong central business district is the backbone of a municipality,” says Ed Driggers, city administrator. “Community leaders recognized that fact in 1999 when the first Greer Community Master Plan was launched with the goal of revitalizing our downtown. The following year, when I arrived in Greer, it was evident that businesses and prospective businesses were literally buying into that plan with a desire to transform downtown. Within a decade, restaurants, businesses, and the city did exactly that and made Greer Station a leading destination for Upstate residents.” 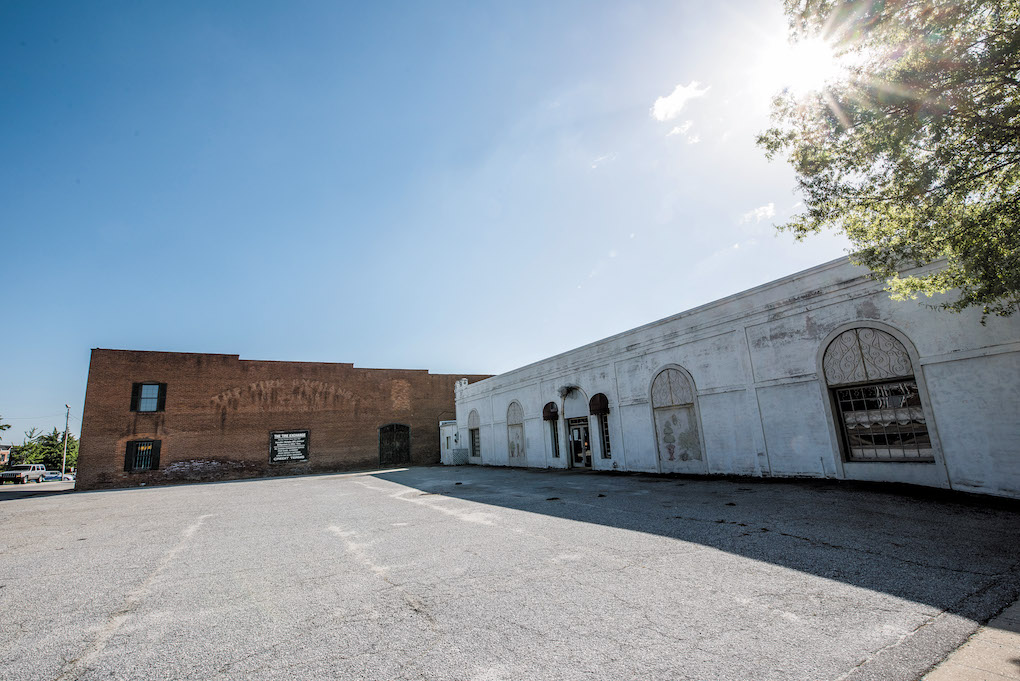 The new Greer hotel, a Hampton by Hilton, will be built on this site at the corner of North Main and East Poinsett streets | photo by Will Crooks

All of this planning over nearly two decades has led to two monumental and transformative projects — a full downtown streetscape plan and the previously announced Greer hotel by Greenville-based Sycamore Investment Group at the corner of North Main and East Poinsett streets in conjunction with a new parking garage. These massive undertakings will occur at about the same time, beginning this month.

While the streetscape plan and wooing a hotel developer have been in the works for years, their happening at the same time was a coincidence, Greer Mayor Rick Danner says, adding that already having the street improvement plan on deck helped draw in the current hotel project.

The repaving of downtown Greer’s alleyways and parking lots begins May 21. The entire project, the largest visible undertaking of which is transforming Trade Street’s retail and restaurant corridor by replacing asphalt with pavers and creating a wider, walkable area while still allowing vehicular traffic, will continue into 2019. Replacing the 100-year-old sewer lines under the streets was the first necessary step before the visible work could begin, says Katie Witherspoon, vice president of operations of Greater Greer Chamber of Commerce.

As for the hotel project, codenamed Project Kaboom by the city, it is in the design and planning stage, says Neetu Patel, vice president of operations for Sycamore Investment Group.

Sycamore Investment Group, which operates eight hotels in South Carolina and Florida, has revealed that the Greer hotel will be a Hampton by Hilton.

“We believe in value-add projects,” Patel says. “The city is ready for a hotel that will help be a catalyst to an already charming area. We found a great partner with the city that happened to be the right project at the right time.”

Danner says four years ago the city was pursuing a hotel project that didn’t pan out.

“We’re in a maturing process, and we weren’t mature then,” he says. “Now we’ve grown.”

The hotel will have at least 100 rooms and will open up the opportunity for other developers to build commercial/retail facilities on adjacent property. The city’s contribution will include a 300-space municipal parking garage. Plans outlined in an ordinance approved by City Council call for the city to lease 90 parking spaces to the developer for 30 years.

Upstate Business Journal previously reported that Driggers said the city would borrow at least $10 million through a bond issue to build the parking garage but that no property tax increase would be required.

“The streetscape, hotel, and parking garage projects are designed to build on the success of that first plan,” Driggers says. “This is an opportunity to build on the solid investments those businesses and the city have made — investments that will allow us to complete the streetscape and parking garage with no millage increase. We knew it was time to update the utility infrastructure downtown. As our partner Greer CPW completes that work, the time is right to redevelop the look of the central business district. It touches transportation, economic development, and quality of life.”

Danner says these projects are, without exaggeration, game changers for downtown. He says the projected returns on the projects are more than monetary, namely a boost in overall confidence in the vitality of downtown Greer, which is evidenced by single-digit vacancy rates, and among other smaller transactions, the recent sale of the 33,000-square-foot Mutual Home Store of Greer property at 139 E. Poinsett St. for $2.8 million to Parkside Pediatrics and Grace Church. Mark Ratchford of KDS Commercial Properties, which was recently named a partner in the Greenville County Square redevelopment project, represented the seller in the transaction. 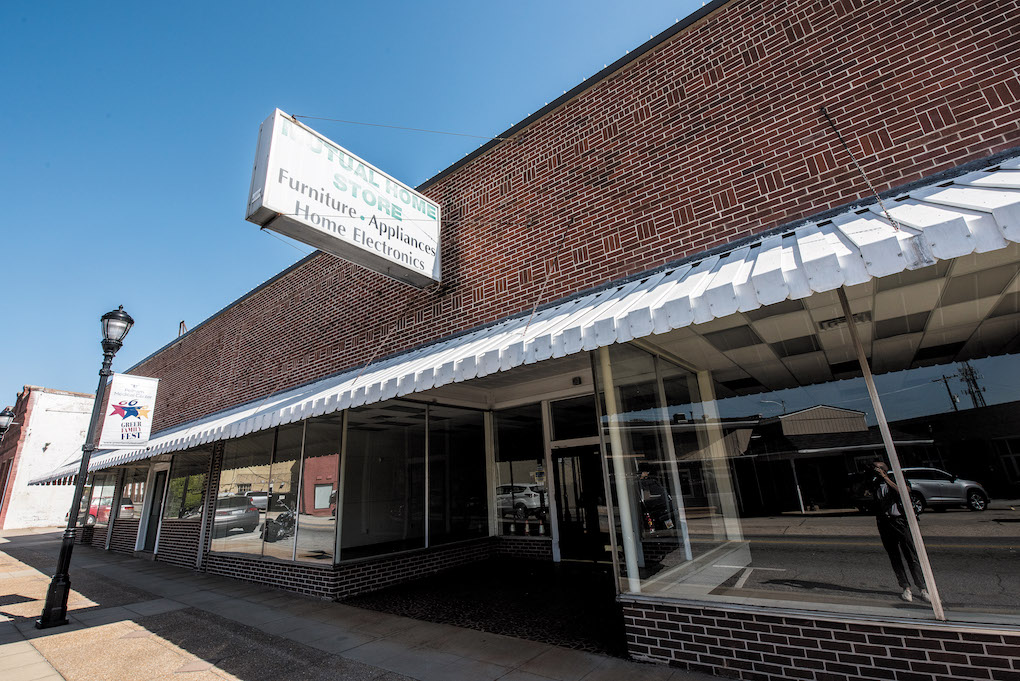 The 33,000-square-foot Mutual Home Store of Greer property will be redeveloped into office and church use | photo by Will Crooks

The medical group that includes Parkside Pediatrics, Tribe513, will be relocating its corporate headquarters to the Mutual Home Store property and opening a Parkside Pediatrics location on the site later this fall, bringing 70-80 employees downtown. Tribe513 is a faith-based, independent medical group that also includes Brio Internal Medicine, Vida Gynecology, and the Breastfeeding Center of Greenville. Grace Church closed on three adjacent buildings, including the old D&D Ford facility, and will transition its current Greer campus over to the buildings once renovations are complete, drawing hundreds of churchgoers downtown.

Deaton says the hotel project is leveraging fringe areas of downtown that have yet to be activated.

“Properties adjacent downtown will start being redeveloped on a scale we haven’t seen,” he says, adding that there are multifamily and mixed-use projects in the works for some of those areas that previously wouldn’t have been possible.

Fourteen residences are scattered within the rows of retail, restaurant, and offices downtown, most of which are second-story apartments above street-level businesses. Three of them are used as Airbnb rentals.

With more than 40 downtown buildings on the national historic register, the city leaders have worked very hard to preserve the charm of downtown, Deaton says.

Greer Station Association (GSA), the downtown merchant association with 65 contributors, is responsible for much of the success of the local merchants and restaurants in many of those historic buildings through its centralized marketing efforts and events, Stevens says.

“Greer Station is already a highly desirable location for businesses,” Driggers says. “Improving the streets, curbing, lighting, and landscaping will only enhance the best parts of downtown and add new ones. A warm and inviting streetscape naturally attracts more visitors and is more desired by young professions — one of the fastest-growing groups in the city of Greer. As our population continues to grow and gets younger, there is a logical demand for activities and businesses that meet their interests. That success then attracts more visitors who may choose to make Greer a destination for a getaway. The hotel project continues a long history of downtown hotels in the city and will provide convenient access to our vibrant downtown and Greer City Park.”

GSA will be ramping up marketing efforts during the streetscape project to ensure businesses are not impacted negatively by the road closures and entrances being temporarily obstructed, says Katie Howell, marketing and research director.

“No pain, no gain,” Stevens says. “We all want the streets to be redone. We know on the other side it’s going to be amazing.”

Deaton says one of the benefits of GSA, of which he is also the executive director, is that it fosters collaboration between the members in a way that creates a unique environment for visitors and residents alike.

“We’re authentic. We’re not trying to emulate any other city,” Deaton says. “Greer is Greer.”