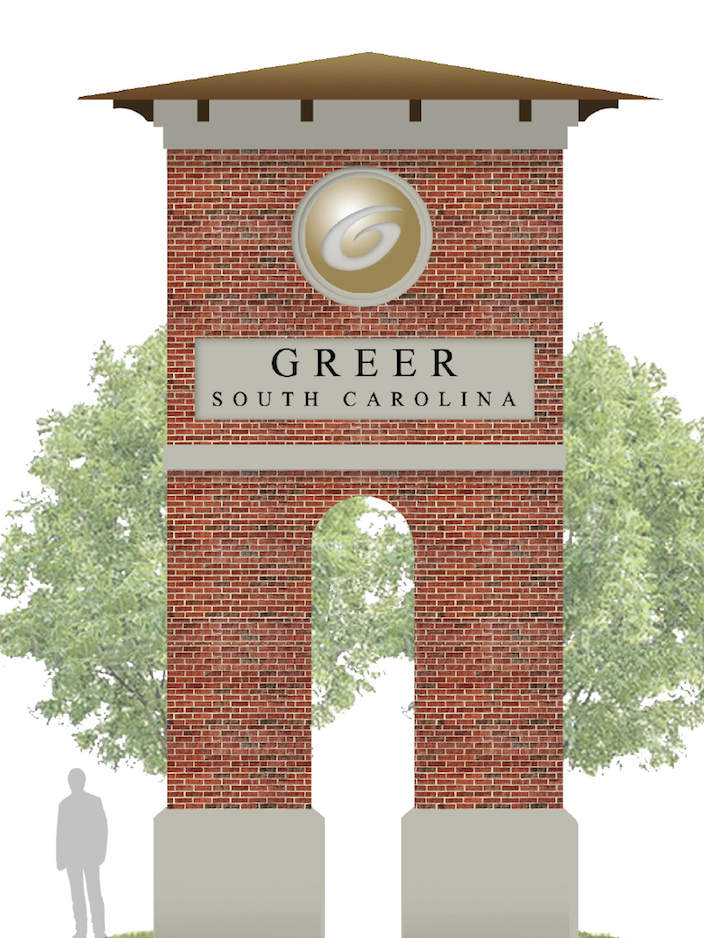 The City of Greer is partnering with BMW to improve landscaping and signage at the I-85 and SC-101 interchange.

As part of the “Eyes on 85” initiative, BMW will install an irrigation system at the interchange and Greer will handle maintenance for the first two years, according to City Administrator Ed Driggers.

The city is using Tax Increment Financing (TIF) funds to cover the cost.

“Those funds were set aside,” Driggers said. “That’s completely paid for and ready to go.”

For the second phase of the project, the city will need to get a permit from SCDOT for gateway signage.

“There will be a ‘Greer, SC’ sign that’s there,” Driggers said.

The proposed sign, replicating the clock tour at city hall, would be about 30 feet tall and 10 feet wide.

“Kimley Horn has worked with this design in concert with what we’re doing in Greer Station streetscape,” Driggers said. “We always knew that it needed to be a brick structure. Brick is our signature building material.”

Once the landscaping and signage is complete at I-85 and 101, the city will work with Greenville–Spartanburg International Airport (GSP), Inland Port Greer and BMW.

“If we’re able to do that, then the exits at SC-101, Brockman McClimon, the airport and Highway 14 will all be improved interchanges,” Driggers said, “and we will be the only community in the Upstate that all of our interchanges have those improvements.”

“We’re real excited about that,” he said. “It will look very nice as a welcome to our community from I-85.”

Other gateway signage sites into the city include the intersection of Gap Creek Road and Wade Hampton Boulevard, the Taylors side and the Main Street entrance, where signage is proposed to be about 20 feet by eight feet.

“We own the triangle property at Gap Creek Road, so we are moving forward with getting that surveyed,” Driggers said. “We don’t have to submit a permit for that side because it’s going on our land.”

“We’re investigating the best, appropriate place to put on the approach to Greer coming from Greenville on Wade Hampton Boulevard,” he said.

Greer is also looking to place signage for the downtown area known as Greer Station.

“Our next location will be at the corner of Poinsett and Wade Hampton Boulevard, at the Ryan’s property, that will be a gateway for Greer Station,” Driggers said.

In addition, Greer Station signage is planned for Barnett Bridge and the other end at the intersection of Main Street and Wade Hampton Boulevard.

“We have been talking about gateway signage for a long, long time,” Driggers said. “It’s going to look nice.”