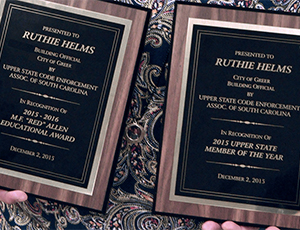 City of Greer building official Ruthie Helms was honored December 2 with two awards from the Upper State Code Enforcement Association of South Carolina.
Helms accepted the Member of the Year Award, which is presented based on outstanding accomplishments and services to the association, as well as the M.F. “Red” Allen Educational Award for outstanding leadership and contribution to the code enforcement profession.

Both awards were presented during the association’s winter meeting at Greer City Hall.

City of Greenville building official Buddy Skinner presented the awards, praising Helms for making “more positive impacts on our association over the past two years than anyone since I have been a member. And that goes back almost 16 years.”

Skinner added that Helms, who is serving as president of the Upper State Code Enforcement Association of South Carolina for a second consecutive year, “has reorganized the way we plan our monthly meetings and has involved more jurisdictions in the planning process. This has taken some of the burden off of the board of directors and given our members an opportunity to be involved.”

Steve Grant, head of the City of Greer’s Building and Development Standards Department, said the dual awards are deserved based on Helms’ dedication to her profession.

“Ruthie is the consummate professional and stays on the leading edge of code changes and advances in the industry. She not only challenges herself through professional advancement, but also encourages our staff to make the most of those opportunities. It simply improves the quality of service we are able to provide to residents and businesses in the City of Greer,” Grant said.

Next Post
City of Greer Monthly Building Report for May 2016