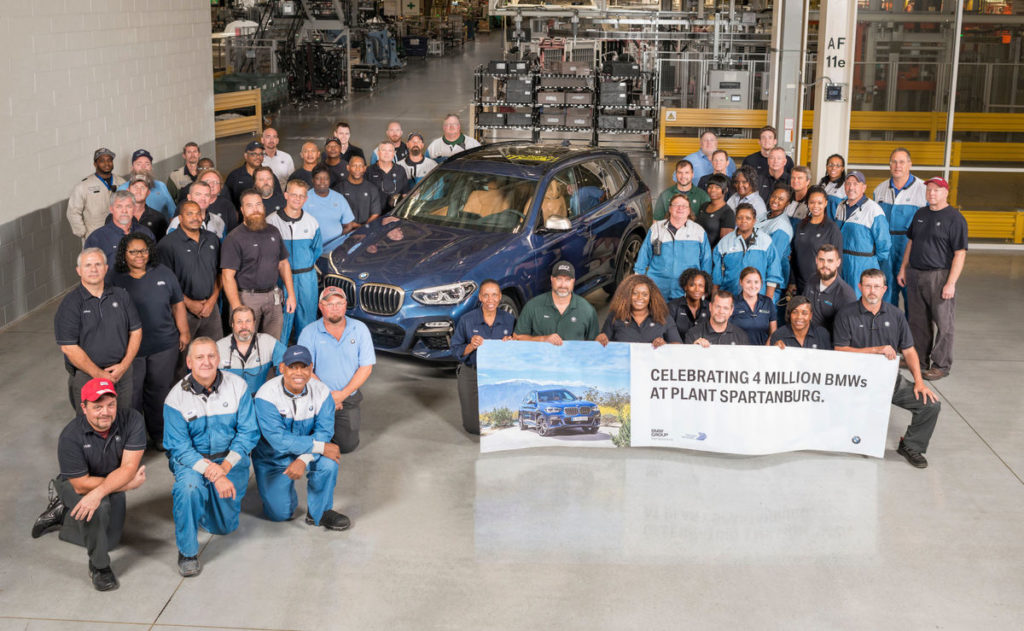 Twenty-three years to the day since the first BMW rolled off the assembly line, the BMW Manufacturing plant in Spartanburg County marked a milestone Friday with the production of its 4 millionth vehicle, a new BMW X3.

The milestone vehicle is a “phytonic blue” metallic BMW X3 xDrive M40i equipped with leather interior. The sports activity vehicle will be shipped to a dealer in Vienna, Austria.

“This achievement reflects the commitment and dedication of every associate to produce premium quality vehicles,” Knudt Flor, president and CEO of BMW Manufacturing, said in a statement. “Customers around the world love our products and our X models are an important part of the company’s success.”

Coupled with the milestone, BMW Group unveiled its Concept X7 iPerformance on Friday at the IAA Cars 2017 show in Frankfurt, Germany. The X7, which is set to debut in 2018, will be produced the Greer plant.

“The new BMW design language employs just a few, extremely precise lines and subtle surface-work to raise the bar in terms of presence and prestige,” Adrian van Hooydonk, senior vice president BMW Group Design, said in a statement. “The BMW Concept X7 iPerformance has a luxurious and sophisticated feel to it, thanks to its understated use of forms and incredibly precise details.”

The rate of vehicle production at BMW’s Greer plant has increased over the past 23 years as the facility has expanded.

In June, the BMW Group announced plans to invest an additional $600 million in the plant from 2018 through 2021 for manufacturing infrastructure for future generations of X models. An additional 1,000 jobs also will be added through 2021.

Last year, the Spartanburg plant produced 411,171 vehicles, making it the largest BMW plant in the world by volume.

The plant has a production capacity of 450,000 vehicles and employs more than 9,000 people.