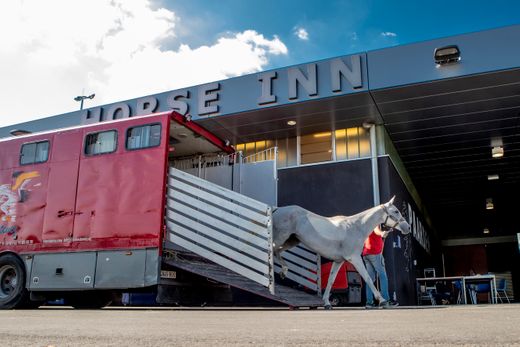 Biggest Ever Commercial Airlift of Horses Underway at GSP Airport

Here’s one for the record books.

The largest commercial airlift of horses in history gets underway this week at Greenville-Spartanburg International Airport in preparation for the FEI World Equestrian Games in Tryon, North Carolina.

On Sunday, a Boeing 777 freighter aircraft carrying 67 horses landed at GSP after a nine hour flight from Liege, Belgium, according to FEI officials and GSP spokesman Dudley Brown.

“We see a lot of cargo traffic at GSP,” Brown said. “But this is our first dealing with four-legged cargo.”

Brown said Sunday’s flight — the first of 10 that will touch down at the airport between now and Sept. 14  — went smoothly and arrived ahead of schedule.

Emirates SkyCargo will move a total of 550 horses participating in the competition, which kicks off Sept. 10 at the Tryon International Equestrian Center, according to a press release.

The horses are transported in customized stalls, with independently air conditioned zones to maintain the perfect temperature, the release said. They also travel with plenty of feed, in-flight snacks and 20 liters of water per horse.

“This is the largest commercial airlift of horses in history, with only wartime shipments of horses coming close, so the military precision involved in the logistics is incredible,” FEI President Ingmar De Vos said in the release. “These horses are finely-tuned equine athletes and are not only very valuable, but they must arrive in peak competition condition, just like their human counterparts.”

Brown said the only other U.S. city to have hosted the World Equestrian Games was Lexington, Kentucky, in 2010.

He said GSP staff consulted with the Lexington airport to get an idea of what to expect. A test flight was held in the spring.